My First Time Calling the Police As A Law-Abiding Citizen

My First Time Calling the Police As A Law-Abiding Citizen 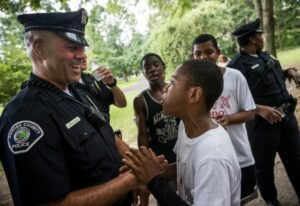 This may be unusual to some people, but in the neighborhoods where I was raised it’s not shocking. In fact, I’d say it’s the norm. We rarely call the police, if ever. If something happens, you figure out other ways to deal with it. Calling the police isn’t an option. For example, I remember when I was young, and my best friend got his bike stolen, my first thought wasn’t to call the police; it was to walk around my neighborhood and ask if anybody saw anything, and in the next few days to keep my ears to the streets to see what kid all of a sudden had a new bike he was bragging about. As I got a little older and experienced my first case of police harassment, most citizens would jump to filing a complaint about the officer. Not me. I was just relieved to make it out of the encounter not in handcuffs and still alive.

This level of distrust and distance towards the police was there before I even had my own personal, negative experiences with law enforcement. Older men around me, and movies (like Boyz N The Hood and Menace II Society), prepared me for the disconnect between the Black man and law enforcement. Disconnect is putting it mildly, for most Black males, it’s downright animosity. NWA said “F**k The Police” in 1988, and Gucci Mane echoed the same sentiment yelling “F**k Twelve” in 2017. Listen to rappers if you really want to know how the Black man in America feels about law enforcement.

So, last Saturday, I, a Black male and convicted felon/returning citizen, popped my cherry and called the police for the first time.

Saturday was a chill day for me. I spent the morning being unproductive and getting sucked into watching World Cup soccer. I hadn’t exercised, hadn’t even washed my face when at noon I finally left my room to get some breakfast. As I warmed up my oatmeal, I thought it’d be a good idea to retrieve the mail from the night before.

Walking towards the end of the driveway, I noticed something was different. There wasn’t a big black mailbox perched on a wooden post by the curb waiting for me to flip open. Instead, the box was laying on the curb and the wood was half erect. My first thoughts were that somebody had seen something. No way a mailbox gets knocked over and no one sees anything. I looked around to see if any neighbors were looking. I don’t know why I did this, but when something bad happens I look around like someone is hiding in the bushes waiting for me to react, so they can laugh. Thinking like this causes me to get angry. Then, I thought, “Well, you didn’t see anything, so how can you automatically assume your neighbors did.” That second thought calmed me down.

I further examined the damage. It was not an easy fix. The wooden post had been broken off. It would require a whole new post to replace it. Now, I’m a city person. Yes, I grew up in the South but I’m not country by nay means. I grew up in Atlanta, a major metropolitan city. Also, I didn’t grow up with a father in the household, so my handyman skills are almost non-existent. I didn’t have a parent in the household who kept a toolkit and fixed things around the house. Screwing something in was about the most we ever did in my household without having to call a specialist. So, how the hell was I supposed to put up a new mailbox?

Then, I thought. Wait! As a renter, I’m responsible for maintenance, but this isn’t maintenance, is it? I pulled out my phone and Googled getting a mailbox destroyed, and realized the word I was looking for is “vandalism”. Yup, I was a victim of vandalism. Okay, I’m not responsible for vandalism. I snapped a few pictures of the damaged mailbox and then came inside. Once inside, I did what I’d never done before, I dialed 9-1-1.

I was nervous about dialing 9-1-1. I braced myself to hear the operator say, “Boy, this isn’t a real emergency,” or, “Oh, you live in that part of town, you should be used to that kind of stuff happening, then.” But, I still called. And to my surprise, the call was smooth, and the officer responded quickly.

As I stepped outside to discuss the situation with the officer, I was a bit uncomfortable about being seen talking to law enforcement in public. Again, in my experiences that’s just something you don’t see. The only time you see officers interacting with Black males are normally when they’re harassing us. This officer was different. He was professional and nice, but not overly friendly. He was cool. Like a regular guy. It shocked me. I appreciated the interaction, though, because it made me feel like he was assisting me instead of looking at me as the problem.

After completing the case filing, we even went on to have a dope conversation about the ills in the community and how we can be of further service to others. This led to me divulging to him that I am a convicted felon and am working on getting my life back on track. I told him about the issues I’ve been facing. He could tell I was a bit frustrated. The officer urged me not to get discouraged and offered up some practical advice on acquiring skills that employers need regardless if I have a felony or not. Then, he decided to treat my mother and I to a night out at the movies, on his dime!

All in all, my first time as a returning citizen calling the police was a pleasant experience. I felt like a real, law-abiding citizen. I felt like I belonged in society, that my concerns and my space was just as important as others. I felt normal.

I don’t expect every experience with the police to be as cool as this one, but this officer totally shifted my perspective on law enforcement. Now, I know there are some good ones out there, and even when I encounter bad ones, I’ll be patient and not generalize their actions to be an indictment of everyone in law enforcement.

I encourage returning citizens to try it if you’ve had a crime committed against you. Call the police. Use a critical service your tax dollars are going towards paying. Don’t be afraid to interact with the police. If you’re now a law-abiding citizen and not in the streets anymore, street rules don’t apply. Stop living by them and “square up”. Let’s bridge the gap between Black males and police. It feels good. Trust me. 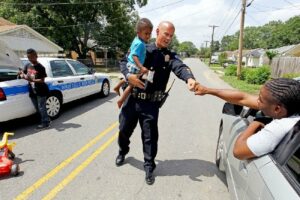