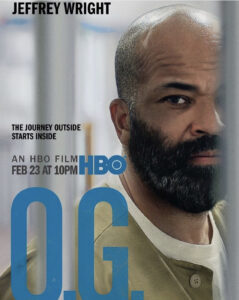 HBO released a film on its channel earlier this year, O.G., starring Jeffrey Wright, of Westworld, and directed by Madeleine Sackler. O.G. is about an older man whose done over 20 years in prison and is about to be released back into the world. The film was shot in an actual prison, Pendleton Correctional Facility – a maximum security prison in Indiana, using real inmates and correctional officers as actors. It originally premiered at the 2018 Tribeca Film Festival, where Wright won the award for Best Actor in a U.S. Narrative Feature Film.

Louis Menkins (Jeffrey Wright) is an O.G. in a maximum-security prison. He is in the final stretch of his 24- year prison sentence for murder. Cool, calm, and collected on the exterior, but a nervous wreck on the inside about the unfamiliar world awaiting him outside of the brick wall and barbed wire prison fences. A change from his regular ways, Louis chooses to befriend a new inmate, Beecher, and pass onto him wisdom about prison life and how he can survive his long sentence. This wisdom revolves around gang life, survival, and how to mentally unlock prior chains of the mind. But the friendship comes at a high cost. It puts Louis’ final days of release in jeopardy, and he must find a way to stay out of harm’s way and keep his release date while keeping his O.G. status intact.

My Perspective On The Film

The film puts moviegoers into the mind of an incarcerated inmate at the tail end of his sentence. Although a fictional tale, the movie displays a real, relatable perspective that can occur to any inmate leaving prison. Inmates have a roller coaster of emotions when they’re about to leave prison. I did as well. Think about this: you’ve been living in a totally different environment, almost like another world unto itself, for years, and then all of a sudden, you’re about to be transported back to your old life. But your old life is different and not exactly how you left it; friends and family have changed, technology has advanced to a point beyond your understanding, and you as a person now see the world differently. You basically have hit the reset button on life, but now have to navigate it with a disadvantage of having a felony attached to you forever. It would make most, if not all, of us a bit nervous.

I enjoyed the film. Sackler’s aim was to shed light on the physical and mental struggles an inmate about to re-enter society faces and she did a remarkable job in conveying that. One of my favorite scenes was Louis sitting with the sister of the victim of his horrific crime (murder) that got him sentenced to prison for all this time. In the scene, he shows his growth as a person apologizing for his transgressions and giving insight as to what he did to change himself for the better while incarcerated.

The movie aroused a lot of old feelings within me seeing such a realistic depiction of prison life. It was a healthy experience as I was also able to reflect and marvel at how far I’ve been brought in my rehabilitation. I recommend this film to everyone, whether you have had the experience of being incarcerated or not, the perspective given on rehabilitation is unique to the film world and sheds light on what millions of men and women re-entering society face.