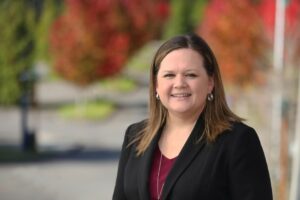 “I’ve seen the impact we can have as a community when we work together for change. I’m running because I believe our government should work for all of us.” – Tarra Simmons, Esq.

Tarra Simmons, Esq. is not your typical returning citizen. For one, she is now a licensed attorney, a feat that has been accomplished by less than 1% of the returning citizen population. And, in the near future, she may be the first returning citizen to become an elected official in the state of Washington. Her story is one with many ups and downs, but one in which perseverance and a belief in rehabilitation and a second chance was paramount.

Coming from a home where both of her parents were addicts, Tarra Simmons did not have an easy path to the summit she currently stands atop. She became a teen mother at the age of 14. Nevertheless, she persevered and became a nurse. After breaking her tailbone and being prescribed opioids for the pain – which made her tired, then Ritalin to stay awake, Simmons then developed a tolerance for the drugs and craved more. Also around this time, she began to hang out with individuals – some family members, who were using methamphetamine. After a number of arrests within the span of less than a year, Simmons was sentenced to prison.

Simmons did two and a half years in prison. While in prison her home life started to become even more difficult. During this period and shortly after, Simmons got divorced, had to file for bankruptcy, and her home went into foreclosure. Fortunately, the prison had a program where local law students came and assisted inmates with their family law issues, and this was when the first seed of becoming an attorney was planted.

After earning her J.D. from Seattle University, the real fight began. Initially applying to sit for the 2017 Washington Bar exam, the Washington State Bar Association refused to let her test. A series of appeals followed, lasting more than a year. Simmons had to re-live and answer character questions about her previous substance addiction and if she was actually rehabilitated and fit to practice law. Simmons answered and held up in the face of intense scrutiny, and after taking her appeal all the way to the Washington Supreme Court, she was able to sit for the bar and get admitted as a licensed, practicing attorney. One of the judges said of Simmons,

“Simmons has proved by clear and convincing evidence that she is currently of good moral character and fit to practice law. We affirm this court’s long history of recognizing that one’s past does not dictate one’s future. We therefore unanimously grant her application to sit for the bar exam.” – Justice Mary Yu

Currently, Tarra Simmons, Esq. is campaigning for a 2020 run in which she’s seeking to become the first returning citizen to be elected to Washington Legislature. She will be running as a (D) State Representative in the state of Washington, District 23, Position 1. The seat is currently held by long-time state official, Rep. Sherry Appleton, who will be retiring at the end of her term. Rep. Appleton has endorsed Simmons as a candidate and has taken it upon herself to personally mentor her to be her successor.

Simmons’ story is one that we can all admire and deem commendable. She faced many ups and downs on her journey, but all the while she stayed committed and knew she was meant to make a bigger impact on her community than what she was settling for in her earlier years. She is a symbol of hope and a belief that a second chance is deserving to us all. I, for one, commend Tarra Simmons, Esq. on her rehabilitation and support her in her present and future efforts advocating for criminal justice reform as well as continuing to be a symbol of hope, showing that anything is possible when given a second chance.

The Fix: Tarra Simmons: From Committing Felonies to Practicing Law

New York Times: Are Felons Fit To be Lawyers? Increasingly The Answer is Yes