The Coronavirus Will Sweep Through American Jails At An Alarmingly Fast Rate, Faster Than It Did In China

The Coronavirus Will Sweep Through American Jails At An Alarmingly Fast Rate, Faster Than It Did In China 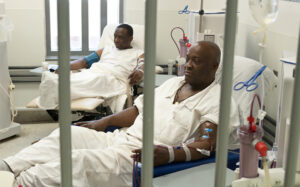 The new coronavirus, or COVID-19, is among us and it has reached pandemic levels. Mayors, city and government officials, all the way up to President Trump have mandated limiting the size of gatherings and practicing social distancing. Why? Because the new coronavirus spreads at its quickest in closed environments. Most relevant to this discussion; jails and prisons.

This virus outbreak could not have come at a worse time. Correctional facilities are widely known to be overcrowded, as our country is currently in the midst of the policy-engendered phenomenon known as mass incarceration. Within a correctional facility, it is impossible to maintain the mandatory six-foot interpersonal distance required to prevent the virus from spreading. Dr. Michelle Barry, an infectious disease doctor, said jail and prisons are like Petri dishes incubating, and will pose a real problem.  Additionally, people over the age of 60 are the most susceptible to becoming fatally ill from this disease and are the leading group with the highest fatalities. According to The Marshall Project and the National Corrections Reporting Program, nearly 150,000 people incarcerated in state correctional facilities were 55 years or older in 2016, the most recent year data is available. Jails and prisons being overcapacity, having a sizable aging population, and many having sub-par health conditions, COVID-19 will spread in these environments at an alarmingly fast rate, one which we are neither prepared for nor fully understand at this point.

What Happened In Chinese Jails and Prisons?

In February of 2020, China had over 500 confirmed cases of COVID-19 in just four of their correctional facilities. The outbreak first surfaced in correctional facilities at Rencheng Prison in mid-February 2020 when a guard was treated for a cough in the hospital. Over the next 10 days, 200 inmates and six more guards were confirmed as being infected with the coronavirus.

Wu Lei, newly appointed head of east China’s Shandong province prisons bureau, said in a press conference following, “The outbreak at Rencheng jail revealed our poor implementation of infection control measures, … we feel so much guilt.” This caused a more distinguished Chinese official to warn others, as well as other countries, about what can happen in their corrections system if this viral threat is not taken seriously. Guo Shengkun, who heads the Chinese Communist Party’s Politics and Legal Affairs Commission, said, “You should resolutely put an end to laxity and taking chances. Take extraordinary measures, take wartime measures to curb the spread of the epidemic. The biggest risk … in the penal system is from outside, and the most effective prevention and control measure is a strictly closed management. Prison guards must be disciplined in their approach to disease control and “cut off the external sources of infection.”

Currently, a number of facilities have suspended inmate visitation and the transportation and processing of new inmates into facilities. However, these measures do not stop correctional staff, vendors, and health care workers from being potential hosts transporting the virus into the facility, and out to the surrounding communities they return back to on a daily basis. “Neither inmates nor correction officers have been provided with masks or cleaning materials like hand sanitizer or bleach. Many workers are afraid that they could pass the virus on to their family members when they go home without knowing,” a 19-year correctional officer working on Rikers Island told Time magazine.

Too Little Too Late: COVID-19 Cases Are Already Popping Up In Jails and Prisons All Over Our Country

There have been confirmed cases in Rikers Island, the main New York City jail complex that houses around 5-6,000 inmates on a daily basis, which includes a population of detainees who have not as yet gone through due process and been convicted of their accused crime. A prison in Georgia, 762- inmate Lee State prison, has reported at least 3 inmates are confirmed to have the virus. A representative from the Georgia Department of Corrections stated in a news release that, “Measures have been taken to screen and quarantine the entire inmate population at that facility. All staff are being screened prior to entry, to include temperature screening, and currently no staff have exhibited signs of flu or COVID-19.” However, as we now understand more about COVID-19, one can have the virus and be a host passing it onto others without exhibiting any symptoms whatsoever.

The outlook of the coronavirus rapidly spreading in jails and prison across America is bleak, and dare I say, inevitable. Inmate health advocates, if not already doing so, will probably start asking governors across the country to consider releasing nonviolent or medically fragile inmates, in particular, those whose sentences are almost up. As of the writing of this article the day of March 25, Fulton County Jail in Atlanta, GA has released 30 pre-trial detainees charged with nonviolent offenses, and are assuring that more will follow. I doubt that one who argues these measures should have been taken at the onset to limit the susceptibility of the virus spreading in these facilities will be on the wrong side of history. The corrections agencies have chosen to take a reactive instead of a preventative approach, and this will undoubtedly lead to cases spiking and being much higher than they currently stand. This reactive approach has put not only the jail and prison population at risk, but the workers within these facilities, and the communities that they are returning home to everyday. They are all interconnected.

Our jail and prison population need to be lowered. Having nonviolent inmates and pretrial detainees incarcerated made no sense before the COVID-19 outbreak, and now the realization of that is more evident than ever before. We will eventually get through COVID-19 but let us all make sure that after we do, the lessons learned from this experience are not lost; ending mass incarceration and implementing other ways to rehabilitate offenders in our country besides punitive incarceration need to be emphasized moving forward.