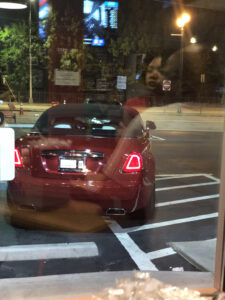 The pic above is of a $400,000 Rolls Royce Phantom parked outside a restaurant I was eating at in the ‘hood recently. There was one Black man in the driver’s seat talking on the phone. NO security and it’s almost 11pm at night. When I say the ghetto, I mean the ghetto. And, this is the same neighborhood where Curtis Snow’s Snow On The Bluff was filmed. Crack and heroine get sold on this block, foreclosed and condemned homes get turned into trap houses every day, and “jays” (what we call junkies in Atlanta) walk the streets like zombies from The Walking Dead. So, if you’ve never been to Atlanta this may be hard to believe that a $400,000 car can be parked outside with NO security in this type of environment, but it happens all the time.

Story of KG- The hood millionaire

When I was locked up, I met a guy named KG* (name changed). KG was a Black guy from the Midwest. He had been getting locked up for selling drugs since he was a teenager. KG was a real hustler. I met him on his second stint in the FEDs. But KG wasn’t a fool. He saved his money, legitimized it into legal businesses, and was now a hood millionaire.

KG had money put away to ensure when he got out the FEDs he’d still be rich, so he spent most of his time cracking jokes and telling stories about all the wild and lavish things he’s done in his life. Basically, he was just killing time waiting to be released because he was set for life financially.

KG would always find me when he wanted to talk about Atlanta. He would seek me out and say “A-T-L, man I love your city.”

One story he told me about how he used to bring one of his luxury cars down to the city to drive around and enjoy himself. I think he said it was a supped up ‘Vette (easy six figure price tag on it). After this particular story, I had to ask him a question I was wondering about for quite some time.

“KG, why do you love coming to my city so much? I mean you got money, so you can enjoy yourself anywhere, especially in your own city. Why come to Atlanta all the time?” I said.

“That’s where you’re wrong, lil’ bro. A Black man can’t drive an expensive car in every city in America. You got to worry about cops harassing you, trying to find the source of your paper. You also got to worry about other Black folks with they crab-in-the-bucket mentality. Robbers, haters, they all watching for the person riding clean. And in most cities, if you driving an expensive car and you Black, if you not an athlete or rapper, your name will be ringing bells in the hood because you’re probably the only person riding clean like that. It’s hectic,” he said. “But in your city, Atlanta, Blacks folks doing well. You got Black folks who make they money legally riding around in Bentleys and Lamborhghinis. And it’s not just just one or two, y’all got a nice number of folks doing it like that. I can go to Lenox Mall in Atlanta or a nice club and valet park my car and not be the only Black person in the spot with an expensive car. I blend in.”

This story by KG and what I witnessed the other night in the hood with the Rolls Royce Phantom parked there illustrates that Atlanta is a unique city for Black people with money. The city energizes your melanin. Whether you from here or not, you can see it, feel it, and be more comfortable. Atlanta is truly the Black Mecca, and we should do all we can to make sure we keep this “Black Magic” alive. Long Live Atlanta, the Black Mecca.