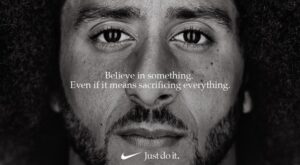 How It All Started

The public was shocked when Nike, the biggest shoe company in the world, recently backed the controversial figure, Colin Kaepernick, whose most notably known for kneeling during the national anthem as an NFL quarterback. The kneeling of NFL players during the national anthem – who many forget was not the real topic the players are trying to bring attention to but rather police brutality and the killing of blacks by the hands of law enforcement – has caused many company sponsors to cut ties with players and the NFL. Papa John’s ended sponsorship with the NFL, saying the kneeling controversy hurt its pizza sales (Click link). Not just company sponsors but the NLF itself wanted no part of the controversy, coming up with new rules that require players to stand during the national anthem and having a number of their owners speak out and demand their players stand and not kneel. And by the way, after Kaepernick did this, he hasn’t been able to get a job as an NFL quarterback since, even though he led his last team, the San Francisco 49ers, to a Super Bowl and is one of only a handful of current quarterbacks in the league to do so. What does Nike do after observing all this? They go and make Colin Kaepernick the face of their newest ad campaign (featured at the end of this post).

Like the NFL national anthem kneeling controversy, the Nike sponsorship of Colin Kaepernick is polarizing. Conservatives and anti-kneelers are vowing to not support Nike. I’ve even seen videos of anti-kneelers burning their Nike apparel in protest.

So what should you do? BUY NIKE STOCK NOW!!! I did :). Nike’s (NYSE: NKE) stock is dipping because of this controversial stance and support of Colin Kaepernick. But, it won’t be down for long. As of Tuesday, the stock fell more than 3%, but is still up 27% overall for the year (Click link). When Kaepernick was still on an NFL roster but was a backup QB, not even a starting quarterback at the moment, his jersey sales were the highest of any player in the league! (Click link). More than clear fan favorites like Odell Beckham Jr., Tom Brady, or even Dallas Cowboys fan favorite, Ezekiel Elliott. Before he refused to kneel for the national anthem, Kaepernick was 20th in jersey sales.

Even if you don’t know much about stocks, you should know this, Nike’s stock price won’t be down long. The initial blow back will occur, and some people will drop them, but the stance they took in support of Kaepernick will fire up others who may have been passive supporters of the company to go all in and support them to the fullest. Thus, evening out and even causing their stock to rise even higher. Similar to what happened with Kaepernick’s jersey sales. My advice is to not wait and capitalize on this and make a little pocket change for yourself while watching everyone get emotional and throw temper tantrums like little children over this topic. And if you’re a supporter of Kaepernick and his kneeling movement then even better, make money while supporting a cause you believe in. Win-Win.