I returned home from prison in 2016. I was optimistic about my job prospects. I held a college degree (and was only a semester away from having my master’s degree at the time of my incarceration), was articulate and knew the ins and outs of selling myself as a potential employee. I knew how to interview well. Surely, I thought, if anyone would be able to find gainful employment right out of prison it would be me. Boy, was I wrong!

I turned in countless applications, and finally I landed a job. My first job out of prison ended up being at Zaxby’s. For many of you who do not live in the south, or who aren’t chicken clucking fiends, Zaxby’s is a chain of fast food restaurants that exclusively serves chicken (they compete in the same market as Chik-fil-A). I wasn’t hired to consult at Zaxby’s, or even be a manager. I was hired as kitchen staff. A job I could have gotten without a GED, much less a college degree. Heck, I could have gotten it without knowing how to speak fluent English, which I soon realized two of my co-workers at the time had difficulty doing. My starting pay was $7.25. So, with student loans about to kick in, and trying to save up and become self-sufficient once more in my life, I had to figure out how to do all this while being under employed and qualifying as a worker earning well below the poverty line.

It was a humbling experience to say the least, but also a shocking realization that this felony would be a major hindrance in my professional pursuits for years to come.

In a July 2018 report, the first study to ever compile data on the formerly incarcerated finding employment was published, and the results were shocking.

The study, “Out of Prison and Out of Work,” conducted by the Prison Policy Initiative, a criminal-justice public policy think tank in Northampton, Mass., wrote that formerly incarcerated people are unemployed at a rate “higher than the total U.S. unemployment rate during any historical period, including the Great Depression.” 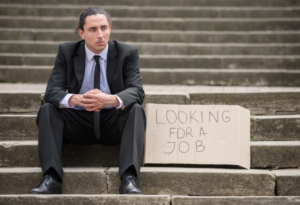 What Does This Mean?

Felons have it extremely difficult finding employment and earning money that can make them self-sufficient, law-abiding citizens, and thus deter them from committing crimes and potentially going back to prison. Returning citizens need stable employment for the same reason every citizen needs stable employment, to support themselves and their families.

National Institute of Justice found that within three years of release, over two-thirds of felons were rearrested. There’s a strong link between being employed and earning a livable wage, and recidivism.

What We Can Do To Help

Simple answer: speak out and encourage legislation to assist the formerly incarcerated in their felonies not being a barrier to finding work.

Hawaii, in 1998, passed the first legislation barring public and private employers from asking about an applicant’s criminal background history before offering employment. A few years following, a ban-the-box project was started by a group called All Of Us Or None. Ban-the-box urges legislation to be enacted where criminal-history inquiries do not influence or preclude job offers, thus making hiring practices fair for returning citizens. But as of 2018, only 11 states have mandated the removal of criminal history inquiries by employers.

Speaking out and encouraging legislation to assist the formerly incarcerated in being granted opportunities to find gainful employment can be done locally, wherever you reside, as well as nationally. Making our community better by fully re-integrating all people within it starts with us.