Why I’m No Longer Watching Sports, And I Recommend You Stop Too… Well, I’m Significantly Cutting Back

Why I’m No Longer Watching Sports, And I Recommend You Stop Too… Well, I’m Significantly Cutting Back 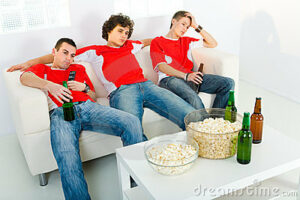 Sports, one of the things that’s almost as old as mankind itself. There is evidence that ancient civilizations like the Romans, Mayans, and Egyptians all engaged in the playing of sports. Back in B.C. times, The Greeks started one of the first global sporting events in the world, the Olympics. I love sports.

If you’re like me, you still have fond memories of watching sporting events like the Olympics and others. From a) seeing Usain Bolt running the 100-meter race with a blistering time of 9.58 seconds, and then hitting his signature pose after being crowned the fastest man to ever live, to b) Michael Phelps looking like a fish reincarnated cutting through the water to win gold after gold after gold, to c) Michael Jordan gliding through the air with his tongue out and the basketball looking like an orange in his hand, and d) Serena Williams yelling every time she crushes a ball over the net towards an opponent who wants nothing to do with a ball coming from a woman destined to go down as the most dominant female in tennis history. Even these fond memories aren’t keeping me from significantly cutting down on my sports watching.

Sports permeates all races, nationalities, gender. The activity of sports is one of the few things I can definitively say is universal. This is evident by the fact that global sporting events like the Olympics and the World Cup exist. CNN reported that in 2010, the World Cup – the most watched sporting event in the world, had 3.2 billion people worldwide watch it. That’s 46% of the world! With so many cultures and different walks of life around the globe, to get almost half of the world population to agree on anything is a HUGE deal. But with all that said, I’m no longer watching sports.

I can totally see the appeal of sports. I mean, name another arena where a small country of 2 million people like Jamaica, can compete against AND beat countries like the U.S., China, and India where hundred of millions of people live? I can’t. Sports is the only thing that allows a country to do that. And when I say this, I’m speaking about the country of Jamaica currently being acknowledged as the place where the fastest runners alive are coming from. Who knows, maybe we’re in the middle of one of the biggest cheating scandals in history, where Jamaicans have found a way to unfairly give an advantage to all of their runners who compete. I mean, Lance Armstrong fooled us all for years. I still think he was on some bullshit for that. Lance, thanks for being a Grade A sucka! With that being said, I seriously doubt it.

My Reason For Not Watching Sports Anymore

The reason I’m not watching sports simply boils down to time, and the value of it. Sure, the similarity of modern athletes to gladiators – who were in fact slaves and prisoners to the Roman empire, is becoming a nagging thought that I am finding harder and harder to ignore, but when I look at how much time I spend watching sports it doesn’t make sense from a productivity standpoint.

If you’re a returning citizen coming home from incarceration, the LAST THING you need to be doing is wasting valuable time doing an activity that doesn’t help you get your life back on track.

Let’s Do The Math

Think about this, the average football game is 4 hours. If you enjoy American football and are a fan of the NFL like myself, that means in a 17-week season you will spend 64 hours watching sports (Remember, there’s 1 bye week, so it’s 16 games x 4 hours each game = 64 hours). And that’s only following one team and watching just their games, without counting their possible playoff games.

If you’re saying to yourself, “Who cares about football, I’m a basketball fan.” NBA games are about 2 ½ hours. The NBA season, with its 82 games, means a fan watches 205 hours of basketball just following his or her particular team.

You know what you could do with 205 extra hours?!? You could write a book (maybe two), start a business, or teach yourself how to write code and program a fully functional app or website from scratch. And, if you’re just an average learner, you can probably learn to do ALL these things with that extra 205 hours. In one sports season, you can learn multiple new skills.

And if you’re like me, I am terrible at multi-tasking while watching sports (I’ve tried and failed miserably). Look, I love sports, and I always will, but I have come to value my time and what I want to accomplish in this one-shot deal called life more than spending a big chunk of it watching sports. Sure, I will still glance at the headlines and see who won the Super Bowl, or the World Cup, or who breaks the 100m world record when it happens (because it will, even impressive records like this one will get broken), but to sit down and commit hours out of my day on a consistent basis to watching a sport that does not help me get any closer to accomplishing any of my life goals and bucket list plans, or putting any money in my pocket is something that’s no longer appealing to me. You have a choice, take more control of your life and shape it the way you want it to be, or keep letting outside influences distract you to the point you never realize your full potential.

What’s more important to you, being a fan of a sports team, or living your best life the way it’s meant to be lived?