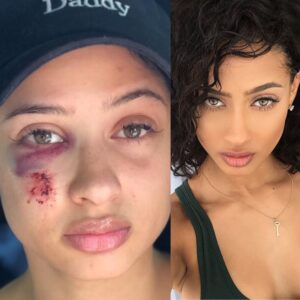 I’m seeing all these people weighing in on the latest violent incident in the hip-hop community, the Rich The Kid home invasion robbery. Many feel like it was an “inside job” by girlfriend, Tori Hughes aka Tori Brixx. The Game is one of those people, along with Rich The Kid’s estranged and soon to be ex-wife. I can confidently say this is false. Why? I’ll tell you why.

First, let’s do a quick rundown of the situation and the details we know:

On the night of June 14 in Los Angeles, while chilling with his girlfriend, Tori Brixx, Rich The Kid had two masked men run up in the house to rob him. Now, he was at Tori’s home, so they came into her spot. Rich bucked on the robbery, and a struggle ensued. Then, three more men came into the home and put a rest to all the static by brutally assaulting him before they stole what XXL quotes as a “significant amount” of valuable possessions. Tori and her sister were in the house. Tori sustained her injuries when she said she heard her sister in the other room screaming and thought the worst, and she said to the masked men “Don’t hurt my sister.” That’s when one of the masked men holding a big ol’ stick stood over her and gun-butted her in the face.

Alright, now we know the details, let me explain why this was not an “inside job” by Tori Brixx.

The Reasons it’s NOT an “inside job”:

First, let’s look at motive: okay, so obviously money could be the primary motive, right? Alright, but let’s go a lil’ deeper and see if Tori stands to benefit from robbing Rich The Kid for money. Rich The Kid and her are chilling at her house the time of the incident. He probably has minimal jewelry and money on him because he’s not out stunting or putting on for the cameras like when he is in “rapper” mode and has to keep up his appearances, so why rob him at this particular time? Honestly, there’s no good reason. It’s not the best time to rob him, especially if your “inside” person is his girlfriend and has close, unlimited access to him. A better time would be after a performance when he has all his jewelry out and also got paid cash from the promoter. That’s a guaranteed bigger score than this *fingers crossed* “I hope he has money and jewels on him” home invasion move.

2) Tori sustained significant injuries and put her brand at risk

Did you see her face? Those robbers roughed her up. Besides the fact that they’re pieces of shit with no principles and more than likely drugged up fiends, let’s keep emotion out of it and look at the psychology of it. Brixx has made a brand with her looks. I think she deejays, but she’s primarily known for being beautiful. So much so, she currently has 2.9 million Instagram followers. To all her followers on Instagram (who are mostly dudes), I know you’re not trying to look at her with her face all battered and bruised up.

And, if you go through her pics, you can tell she doesn’t take pics lackin’. Not even a woman with 600 Instagram followers is going to agree to you smashing her in the face with a gun. She might want to sell the robbery, but she’s never going to go that far. What normally happens is if it’s an “inside job” and the woman is involved, the robbers will separate the two and have her in another room, and she’ll sell it by screaming and stuff. The only way women get hurt in robberies is if they have nothing to do with it, and the robbers are willing to take it that far to get the guy they’re robbing to talk and give up what they came to steal.

And last but not least, let’s add up all the people in on the job. There were two masked men, then three more came in making it five. So, if you believe it may be an “inside job,” then Tori is also in on it, and that’ll make six people. And believe me, if Tori was in on it her sister also got tipped off by her, so we could bump it up to seven people but let’s stay at six and assume she breaks her sister off a lil’ something from her cut of the job. So the internet, it says Rich The Kid’s net worth is $2 million. Who knows if it’s true or not, but alright let’s go with it. If he’s worth about $2 million, I can’t see him having more than $100,000 on him in jewelry and stuff that night (and that’s me overestimating). For the home invasion job that will net a profit of $100k, and six people are in on it meaning that each person got $16,666.67 each when split evenly. That is not life-changing money. That’s only a good haul for a week, and a drop in the bucket in terms of a lifetime. And, Tori would probably have to give her sister like $5k to be in on it as well, so she’s looking to walk away with a lil’ over $11k. That’s laughable to think that she took a gun-butt to the face and did all that just for $11k. Her facial injuries will add up to that ticket. Not to mention, she can make more than that in a week doing sponsored IG posts.

That sums up my clear and obvious reasons why Tori Brixx didn’t have anything to do with this home invasion. I don’t know these individuals and are in no way associated with them. Just wanted to offer a real take on the situation. I wish all the victims involved a speedy recovery. And, quick advice to Rich The Kid, whenever someone tries to rob you, give it up, lil’ bruh. You are a successful person who can make back whatever they steal from you. You’re a tax-paying, citizen, no need to act tough and lose your life over some jewelry. There’s a lot of tough guys sleeping in the cemetery.

And to everyone else out there, stay safe and learn from this situation.